‘The Round’ – book launches

‘The Round: in Bob Graham’s footsteps’ was launched at two events, in Keswick and North London. The first took place on Saturday 19th Sept at the iconic Moot Hall in Keswick’s main street. This was the only real choice as it is the venue that is the normal start and finish point for the Bob Graham Round. I hired the community room at the Moot Hall which holds 40, and all the tickets were sold. There was a real buzz as assorted family, friends, clubmates, and some noted fell legends, gathered for the 6pm start of the event. After some drinks and networking my friend Mike Cambray, whom I have shared many an adventure on the fells with, took the floor and formally introduced me to the audience. He started with an observation that he had known me for 42 years. How appropriate was that for a book about an event that covers 42 peaks and was first completed by Bob Graham at the age of 42?

I then showed a few slides, some from the book and some of my own (and friends’ ones) from a recent Round I had supported. I did forget to thank a couple of people – so here’s thanks to Lucy (Bookends) and Alex (Moot Hall Information Centre) for help with the event. I also forgot to ask if there were any questions – then got one in the network time from someone, and I couldn’t answer it!

What was most pleasing was that some of the main players that I had interviewed for the book rocked up to the event. It was great to chat to Nicky Spinks right at the beginning (who couldn’t stay) and to see Steve Birkinshaw and Billy Bland stroll in and settle down, almost unnoticed – except by me who was by now excitedly whispering to friends ‘look who’s here’! Kenny and Pauline Stuart had provided a fulsome cover quote for the book (having read the manuscript) and also kindly joined us for the launch.

Bookends shop in Keswick had kindly agreed to provide books for the event, and Lucy did a fabulous job selling them to attendees before and after the formal bit. In the networking time in the latter part of the event is was great to see folk having the opportunity to chat with each other and gradually see Steve, Billy, Kenny and Pauline gather small crowds around themselves. I signed books for those that wanted it, and a good number got theirs counter-signed by one or more fell legend(s), which was great to see.

It was great to have Mike there, plus my wife Moira and son Josh. We repaired with some of our friends to the Dog and Gun for a celebratory drink and a chat, then for fantastic fish supper at the famous Old Keswickian chip shop, seated in style upstairs. The event venue, pub and food (all iconic Cumbria locations) were all within yards of each other in the centre of Keswick – an evening to savour. 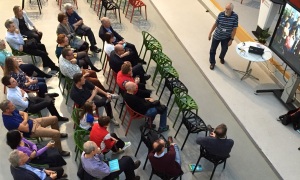 On the Wednesday after the Keswick launch I held a second ‘launch celebration’ at Middlesex University, in Hendon, North London (my employer). Thirty friends, workmates and athletic clubmates attended an informal event in the Grove Atrium. For this audience I told some stories about the Round, its innovators and included more pictures and some video clips from the Round I had supported in July. This time I remembered to ask if there were any questions, which produced some interested discussion. Again a good number of books were sold and signed, and a post-event pint and pizza were taken at the Greyhound pub, in which I used to spend far too much time earlier in my life. There will be a short video available of this event shortly.

‘The Round: in Bob Graham’s footsteps’ can be purchased directly from me (signed) and from bookshops, such as Waterstones, Bookends, Fred Holdsworth’s and Sam Read’s (the latter three all being in Cumbria) and online. 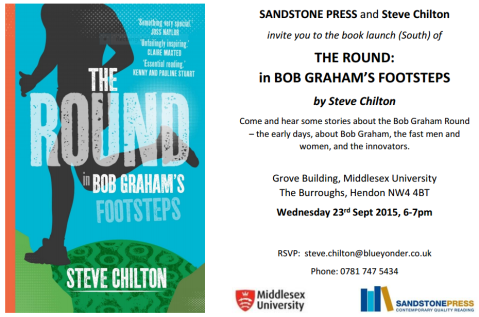 There will be second launch event on Wed 23 September. Come and hear some stories about the Bob Graham Round – the early days, about Bob Graham, the fast men and women, and the innovators.

This is FREE and will be held in the Grove Building, Middlesex University The Burroughs, Hendon NW4 4BT, from 6-7pm. In order to cater it would be good if you would RSVP to: steve.chilton@blueyonder.co.uk

If you are not able to make either of the launch events you will be able to buy signed copies of the book at Bookends, Sam Read’s and Fred Holdsworth’s. It is also available online from Waterstones and Amazon (where the Kindle version can be downloaded).

The Book: The Round is not only a history of the Bob Graham Round, but also an exploration of the what, why and how of this classic fell endurance challenge. After covering the genesis of the BGR in detail, it documents its development from a more-or-less idle challenge to its present status as a rite of passage for endurance runners. Interspersed with this detail of the round are extensive profiles of many of the event’s significant individuals: innovators, record setters, recorders and supporters.

To get a feel for it you can read an extract (about Bob Graham, the man), which is available in the current edition of Trail Running Magazine, grandly entitled ‘The 24 hours that changed running history’ (p58-61).