Text from the dust jacket of the book:

Running Hard: the story of a rivalry describes the lives of two very different athletes and covers in depth the 1983 Fell Running Championship season, when they were the two top runners battling to win the championship. John Wild was an international steeplechaser from the Midlands who had moved to the fells to go head-to-head with the Cumbrian born fell runner Kenny Stuart.

The championship at that time was much tougher than it is now. After fifteen races the title was decided by just twenty seconds at the final race. Though their running careers would then begin to diverge, Stuart becoming a 2-11 marathon runner, they remained firm friends. The events are illuminated by interviews and analysis from several of their main contemporaries.

Contents of ‘Running Hard: the story of a rivalry’
Chapter 1 – Gotta keep it loose
Chapter 2 – A good constitution for a small fella
Chapter 3 – Laidback about training
Chapter 4 – Consistency is everything
Chapter 5 – One serious regret
Chapter 6 – Run lighter, run faster
Chapter 7 – Good at climbing, good at descending, and good at training
Chapter 8 – Having the guts to commit
Chapter 9 – An idol and an inspiration
Chapter 10 – Young, lean and hungry
Chapter 11 – He came to beat me that day
Chapter 12 – Too frightened to go on
Chapter 13 – Nothing to do with fitness
Chapter 14 – Drinks had been taken
Chapter 15 – One of us had to come second
Chapter 16 – Trying to follow white flags in a snowstorm
Chapter 17 – Ripe for a fast time
Chapter 18 – Never an easy run with him
Chapter 19 – Like winning the FA Cup
Chapter 20 – He’ll run a good bit faster in the future
Chapter 21 – Really treat winners well on the continent
Chapter 22 – Finished as firm friends

Text from the dust jacket about the book:

The Round: in Bob Graham’s footsteps is not only a history of the Bob Graham Round, but also an exploration of the what, why and how of this classic fell endurance challenge. After covering the genesis of the BGR in detail, it documents its development from a more-or-less idle challenge to its present status as a rite of passage for endurance runners. Interspersed with this detail of the round are extensive profiles of many of the event’s most significant individuals: innovators, record setters, recorders and supporters. These include Billy Bland, Steve Birkinshaw, Martin Stone, Jim Mann, Helene Diamantides, and Nicky Spinks. The Round is emphatically NOT a ‘how to’ guide, but it IS a terrific follow up to Steve Chilton’s hugely popular first book, It’s a hill, get over it.

Text from the dust jacket about the book:

It’s a Hill – Get over It offers a detailed history of the sport of fell running and tells the stories of some of the great exponents of the sport through the ages. Many of these fell runners achieved greatness whilst still working full time in traditional jobs, a million miles away from the professionalism of other branches of athletics nowadays.

The book spans the whole history of fell running -­ from the early days of the sport, right through to it going global with the World Championships. Influential athletes such as Bill Teasdale, Fred Reeves, Joss Naylor, and Billy and Gavin Bland are profiled in depth and their lives and extraordinary achievements explored.

In addition, It’s a Hill contains in-depth conversations with some of the greats including Tommy Sedgwick, Jeff Norman, Pauline and Kenny Stuart, Helene Whitaker and Rob Jebb.

A mix of history and personal stories makes for an informative and inspiring read for those with a love of this unique and wonderful British sport. One which will spur you to get back out there. 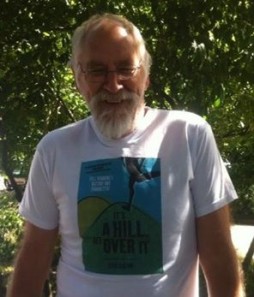